Joshua was a mighty military leader. He carefully obeyed orders given to him by God. He put into action and had the mindset to be strong and courageous with God. His men trusted him.

Israel had to attack Ai. Joshua chose 30,000 of his best soldiers and proceeded to take the town of Ai. They did an ambush. They bluffed out the men of Ai by pretending to fearfully run from their army. Meanwhile, Israelite soldiers waited until all the men left the town chasing after the ‘fleeing’ army of Israel and then the Israelites conquered the vulnerable town and burned it. After that, the Israelites went after the Ai men who had just seen their town burning up and attacked them from both sides and killed them all except for the king who they they impaled on a pole outside the town gate.

Joshua was a man’s man who followed God fully. He was a powerful commander for Israel. He was trained by Moses always put God first even when God gave him difficult orders. 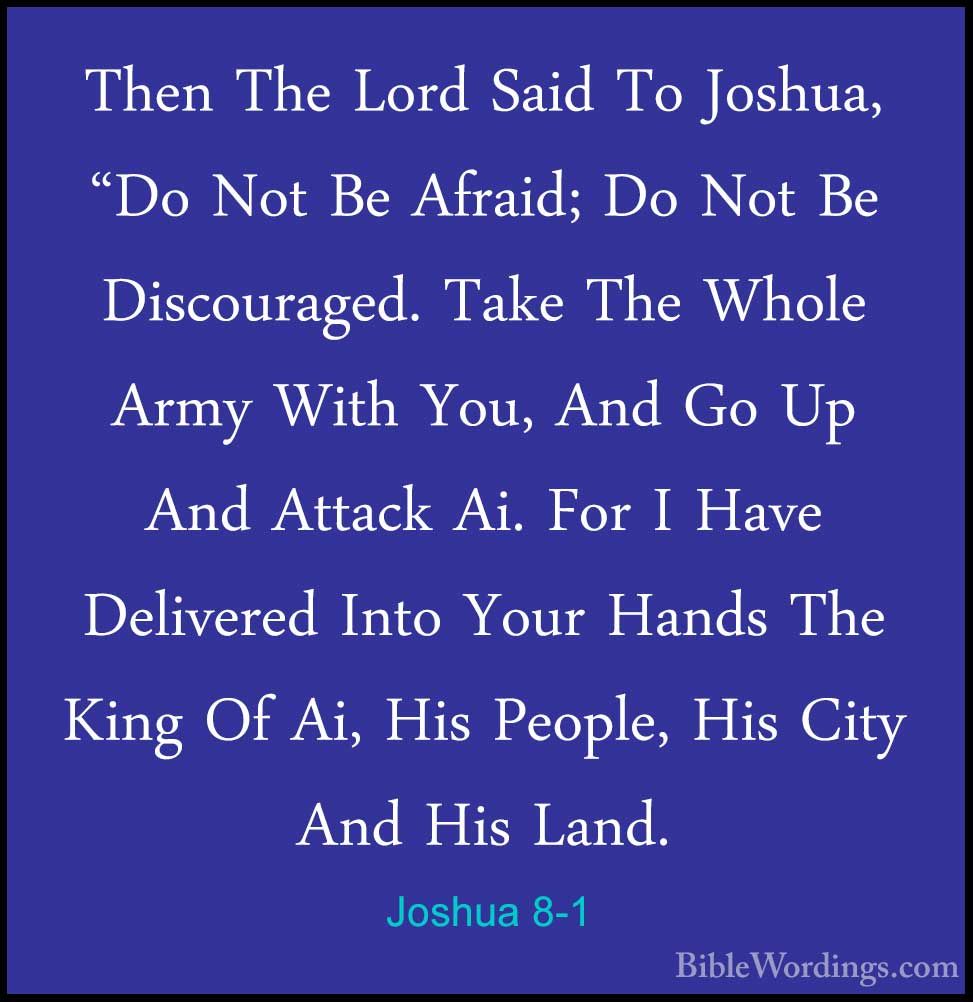 8 Then the Lord said to Joshua, “Do not be afraid or discouraged. Take all your fighting men and attack Ai, for I have given you the king of Ai, his people, his town, and his land. 2 You will destroy them as you destroyed Jericho and its king. But this time you may keep the plunder and the livestock for yourselves. Set an ambush behind the town.”

3 So Joshua and all the fighting men set out to attack Ai. Joshua chose 30,000 of his best warriors and sent them out at night 4 with these orders: “Hide in ambush close behind the town and be ready for action. 5 When our main army attacks, the men of Ai will come out to fight as they did before, and we will run away from them. 6 We will let them chase us until we have drawn them away from the town. For they will say, ‘The Israelites are running away from us as they did before.’ Then, while we are running from them, 7 you will jump up from your ambush and take possession of the town, for the Lord your God will give it to you. 8 Set the town on fire, as the Lord has commanded. You have your orders.”

9 So they left and went to the place of ambush between Bethel and the west side of Ai. But Joshua remained among the people in the camp that night.10 Early the next morning Joshua roused his men and started toward Ai, accompanied by the elders of Israel.11 All the fighting men who were with Joshua marched in front of the town and camped on the north side of Ai, with a valley between them and the town. 12 That night Joshua sent about 5,000 men to lie in ambush between Bethel and Ai, on the west side of the town. 13 So they stationed the main army north of the town and the ambush west of the town. Joshua himself spent that night in the valley.

18 Then the Lord said to Joshua, “Point the spear in your hand toward Ai, for I will hand the town over to you.” Joshua did as he was commanded. 19 As soon as Joshua gave this signal, all the men in ambush jumped up from their position and poured into the town. They quickly captured it and set it on fire.

20 When the men of Ai looked behind them, smoke from the town was filling the sky, and they had nowhere to go. For the Israelites who had fled in the direction of the wilderness now turned on their pursuers. 21 When Joshua and all the other Israelites saw that the ambush had succeeded and that smoke was rising from the town, they turned and attacked the men of Ai.22 Meanwhile, the Israelites who were inside the town came out and attacked the enemy from the rear. So the men of Ai were caught in the middle, with Israelite fighters on both sides. Israel attacked them, and not a single person survived or escaped. 23 Only the king of Ai was taken alive and brought to Joshua.

24 When the Israelite army finished chasing and killing all the men of Ai in the open fields, they went back and finished off everyone inside. 25 So the entire population of Ai, including men and women, was wiped out that day—12,000 in all. 26 For Joshua kept holding out his spear until everyone who had lived in Ai was completely destroyed.[c] 27 Only the livestock and the treasures of the town were not destroyed, for the Israelites kept these as plunder for themselves, as the Lordhad commanded Joshua. 28 So Joshua burned the town of Ai,[d] and it became a permanent mound of ruins, desolate to this very day.

29 Joshua impaled the king of Ai on a sharpened pole and left him there until evening. At sunset the Israelites took down the body, as Joshua commanded, and threw it in front of the town gate. They piled a great heap of stones over him that can still be seen today.

30 Then Joshua built an altar to the Lord, the God of Israel, on Mount Ebal.