Jesus was in full control when he allowed the Jews to falsely convict Him and then put Him on the cross. He chose the moment he breathed His last. He could have called armies of angels to rescue him. He fixed His human mind on the goal to be achieved and the joy He would have when His mission was complete. He lived a sinless life and then He offered Himself up as the final and ultimate sacrifice to cover every sin that could ever be committed so that any human, so choosing, could have a close relationship with God.

I wish the chilling yet profound realization of the Roman soldier would be the conclusion and opinion of every soul on this planet. Then revival truly would come.

So, I pray for this Easter, great revival would come and human souls everywhere would realize Jesus truly is the Son of God! 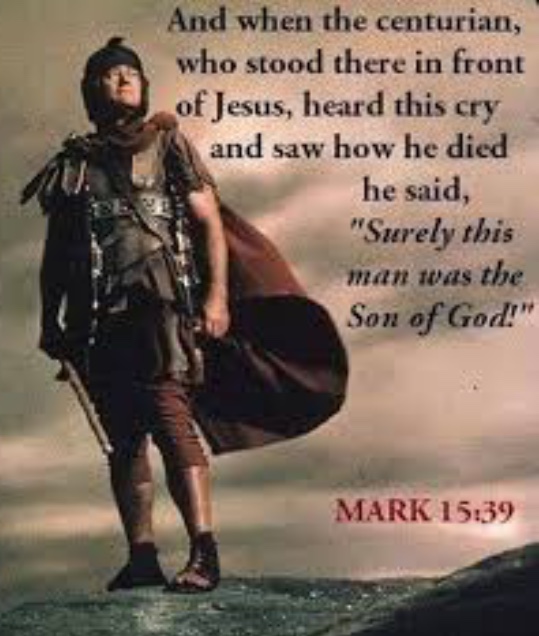 33 At noon, darkness fell across the whole land until three o’clock. 34 Then at three o’clock Jesus called out with a loud voice, “Eloi, Eloi, lema sabachthani?” which means “My God, my God, why have you abandoned me?”[a]

35 Some of the bystanders misunderstood and thought he was calling for the prophet Elijah. 36 One of them ran and filled a sponge with sour wine, holding it up to him on a reed stick so he could drink. “Wait!” he said. “Let’s see whether Elijah comes to take him down!”

37 Then Jesus uttered another loud cry and breathed his last. 38 And the curtain in the sanctuary of the Temple was torn in two, from top to bottom.

39 When the Roman officer[b] who stood facing him[c] saw how he had died, he exclaimed, “This man truly was the Son of God!”

40 Some women were there, watching from a distance, including Mary Magdalene, Mary (the mother of James the younger and of Joseph[d]), and Salome. 41 They had been followers of Jesus and had cared for him while he was in Galilee. Many other women who had come with him to Jerusalem were also there.

42 This all happened on Friday, the day of preparation,[e] the day before the Sabbath. As evening approached,43 Joseph of Arimathea took a risk and went to Pilate and asked for Jesus’ body. (Joseph was an honored member of the high council, and he was waiting for the Kingdom of God to come.)44 Pilate couldn’t believe that Jesus was already dead, so he called for the Roman officer and asked if he had died yet. 45 The officer confirmed that Jesus was dead, so Pilate told Joseph he could have the body. 46 Joseph bought a long sheet of linen cloth. Then he took Jesus’ body down from the cross, wrapped it in the cloth, and laid it in a tomb that had been carved out of the rock. Then he rolled a stone in front of the entrance. 47 Mary Magdalene and Mary the mother of Joseph saw where Jesus’ body was laid.