When Moses was leading the Israelites to the Promised Land, his sister Miriam and his brother, the priest, Aaron came to him criticizing him for who he married.

The Bible says Moses was the most humble, meek man on earth. God spoke mainly to him as he led. God was angry with Moses’ siblings because of their unnecessary criticism.

Being human, we all need to keep a close check on our humbleness. What’s the reading on our humble meter? God speaks to and can use humble people. There are so many ways to get prideful. God resists the proud and gives grace to the humble. 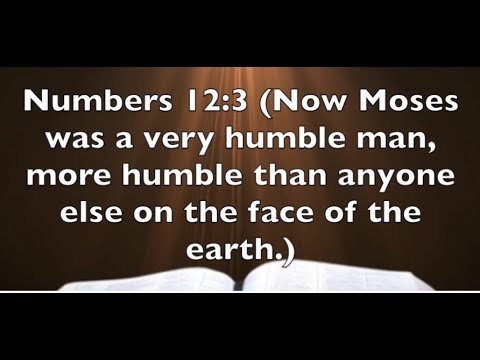 1 While they were at Hazeroth, Miriam and Aaron criticized Moses because he had married a Cushite woman. 2 They said, “Has the Lordspoken only through Moses? Hasn’t he spoken through us, too?” But the Lordheard them. 3 (Now Moses was very humble—more humble than any other person on earth.)

“If there were prophets among you,
I, the Lord, would reveal myself in visions.
I would speak to them in dreams.
7 But not with my servant Moses.
Of all my house, he is the one I trust.
8 I speak to him face to face,
clearly, and not in riddles!
He sees the Lord as he is.
So why were you not afraid
to criticize my servant Moses?”

9 The Lord was very angry with them, and he departed. 10 As the cloud moved from above the Tabernacle, there stood Miriam, her skin as white as snow from leprosy.[c] When Aaron saw what had happened to her, 11 he cried out to Moses, “Oh, my master! Please don’t punish us for this sin we have so foolishly committed. 12 Don’t let her be like a stillborn baby, already decayed at birth.”

14 But the Lord said to Moses, “If her father had done nothing more than spit in her face, wouldn’t she be defiled for seven days? So keep her outside the camp for seven days, and after that she may be accepted back.”

15 So Miriam was kept outside the camp for seven days, and the people waited until she was brought back before they traveled again. 16 Then they left Hazeroth and camped in the wilderness of Paran.