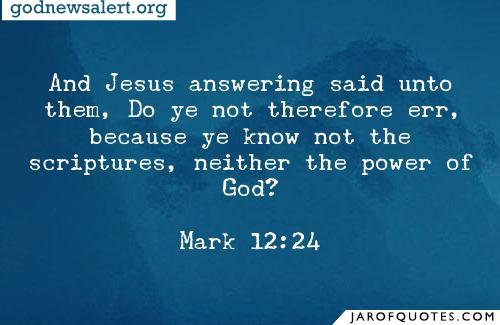 18 Then Jesus was approached by some Sadducees—religious leaders who say there is no resurrection from the dead. They posed this question:19 “Teacher, Moses gave us a law that if a man dies, leaving a wife without children, his brother should marry the widow and have a child who will carry on the brother’s name.[a] 20 Well, suppose there were seven brothers. The oldest one married and then died without children. 21 So the second brother married the widow, but he also died without children. Then the third brother married her. 22 This continued with all seven of them, and still there were no children. Last of all, the woman also died. 23 So tell us, whose wife will she be in the resurrection? For all seven were married to her.”

26 “But now, as to whether the dead will be raised—haven’t you ever read about this in the writings of Moses, in the story of the burning bush? Long after Abraham, Isaac, and Jacob had died, God said to Moses,[b] ‘I am the God of Abraham, the God of Isaac, and the God of Jacob.’[c] 27 So he is the God of the living, not the dead. You have made a serious error.”

28 One of the teachers of religious law was standing there listening to the debate. He realized that Jesus had answered well, so he asked, “Of all the commandments, which is the most important?”

29 Jesus replied, “The most important commandment is this: ‘Listen, O Israel! The Lord our God is the one and only Lord. 30 And you must love the Lordyour God with all your heart, all your soul, all your mind, and all your strength.’[d] 31 The second is equally important: ‘Love your neighbor as yourself.’[e] No other commandment is greater than these.”

32 The teacher of religious law replied, “Well said, Teacher. You have spoken the truth by saying that there is only one God and no other. 33 And I know it is important to love him with all my heart and all my understanding and all my strength, and to love my neighbor as myself. This is more important than to offer all of the burnt offerings and sacrifices required in the law.”

34 Realizing how much the man understood, Jesus said to him, “You are not far from the Kingdom of God.”And after that, no one dared to ask him any more questions.