It is an interesting study to notice while reading through the four Gospels in the New Testament, how Jesus responded when fear rose up in people. Jesus instantly calmed their fears. In His wisdom and His love for them He knew to promptly stop their fearfulness.

Once, when a powerful storm arose while His disciples were in a boat (some of them were well-weathered fishermen), Jesus calmed the men and told them to take courage. Like Joshua, in the Old Testament, as he lead the Israelites into the Promised Land, the disciples were calmed by trusting God. God still calms us today. Whether we’re about to go and conquer new territory in our lives, God goes before us, or whether we’re in the midst of a horrific, fearful storm, Jesus is there fully present to calm our anxious thoughts. 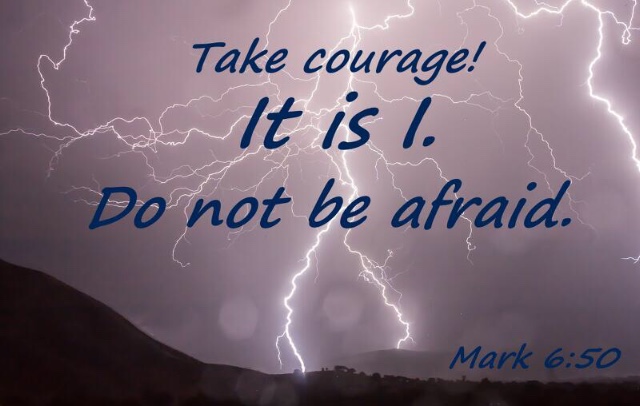 47 Late that night, the disciples were in their boat in the middle of the lake, and Jesus was alone on land. 48 He saw that they were in serious trouble, rowing hard and struggling against the wind and waves. About three o’clock in the morning[a] Jesus came toward them, walking on the water. He intended to go past them, 49 but when they saw him walking on the water, they cried out in terror, thinking he was a ghost. 50 They were all terrified when they saw him.

But Jesus spoke to them at once. “Don’t be afraid,” he said. “Take courage! I am here![b]” 51 Then he climbed into the boat, and the wind stopped. They were totally amazed,52 for they still didn’t understand the significance of the miracle of the loaves. Their hearts were too hard to take it in.