I believe the words I speak as a Christian are impactful. I try everyday to say positive words of blessings for those in my life. I pray God’s Word every morning for my loved ones.

I read, towards the end of the Gospel of Matthew, that Jesus was put on trial and the high priest of the Jewish temple would determine the verdict of guilt or innocence of a crime. He asked Jesus if He was the Messiah to the Jews, the Son of God. Jesus replied “You have said it.” These Words stand out to me. Why did Jesus say that to this man of importance in the Jewish community? I do not exactly know. The man was definitely in a powerful position. The Jews trusted him. But he was not of God because he accused Jesus of blasphemy against God. But Jesus gave the priest’s words power, I suppose, when He said…You have said it. Jesus loved the high priest like all other people and even though the priest didn’t believe it in his heart, the mere saying of You are the Messiah, the Son of God was truth. But a few verses later, the priest clearly rejects Jesus and accused Him of blasphemy. Was Jesus encouraging the high priest toward the purest truth that Jesus is God’s Son, hoping, in front of the crowd, that he would accept such truth? 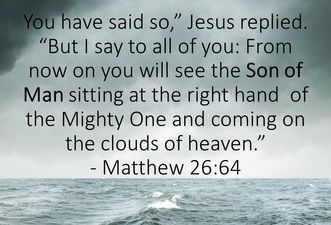 62 Then the high priest stood up and said to Jesus, “Well, aren’t you going to answer these charges? What do you have to say for yourself?” 63 But Jesus remained silent. Then the high priest said to him, “I demand in the name of the living God—tell us if you are the Messiah, the Son of God.”

64 Jesus replied, “You have said it. And in the future you will see the Son of Man seated in the place of power at God’s right hand[a] and coming on the clouds of heaven.”[b]

65 Then the high priest tore his clothing to show his horror and said, “Blasphemy! Why do we need other witnesses? You have all heard his blasphemy. 66 What is your verdict?”

“Guilty!” they shouted. “He deserves to die!”

67 Then they began to spit in Jesus’ face and beat him with their fists. And some slapped him, 68 jeering, “Prophesy to us, you Messiah! Who hit you that time?”