God promised Abraham He would multiply his descendents and He would abundantly bless him on this earth. He would be a leader and be powerful if he obeyed God. Abraham did obey God but he lived in God’s promised land of Canaan until he died. He was even buried in the land that he didn’t possess yet. He trusted God and God blessed him greatly. Abraham had a miracle son named Isaac. Isaac followed his dad’s example in living his life. Abraham’s dad didn’t trust. He stopped short. He didn’t obey God and move to Canaan like Abraham.

Isaac also obeyed God. God so greatly blessed Isaac that the King had to kick him out of Canaan because he had become too powerful. People were jealous.

As Christians, because of Jesus!, we are of the lineage of Abraham. When we submit to God and have faith like Abraham, He will bless us in amazing ways with earthly goods, leadership and power. We must prepare and humble ourselves and take on the overflowing blessings of God! 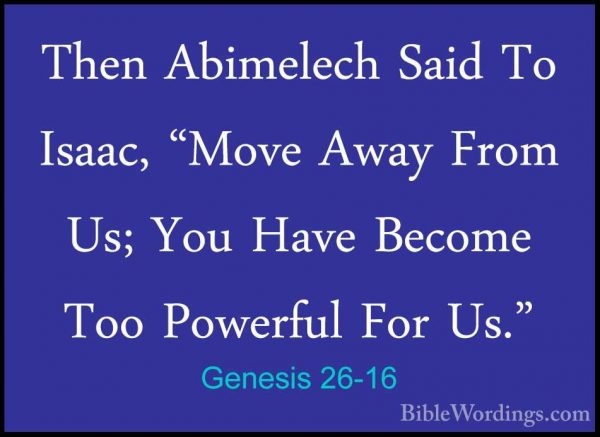 26 A severe famine now struck the land, as had happened before in Abraham’s time. So Isaac moved to Gerar, where Abimelech, king of the Philistines, lived.

2 The Lord appeared to Isaac and said, “Do not go down to Egypt, but do as I tell you. 3 Live here as a foreigner in this land, and I will be with you and bless you. I hereby confirm that I will give all these lands to you and your descendants,[a] just as I solemnly promised Abraham, your father. 4 I will cause your descendants to become as numerous as the stars of the sky, and I will give them all these lands. And through your descendants all the nations of the earth will be blessed. 5 I will do this because Abraham listened to me and obeyed all my requirements, commands, decrees, and instructions.”6 So Isaac stayed in Gerar.

7 When the men who lived there asked Isaac about his wife, Rebekah, he said, “She is my sister.” He was afraid to say, “She is my wife.” He thought, “They will kill me to get her, because she is so beautiful.” 8 But some time later, Abimelech, king of the Philistines, looked out his window and saw Isaac caressing Rebekah.

9 Immediately, Abimelech called for Isaac and exclaimed, “She is obviously your wife! Why did you say, ‘She is my sister’?”

“Because I was afraid someone would kill me to get her from me,” Isaac replied.

10 “How could you do this to us?” Abimelech exclaimed. “One of my people might easily have taken your wife and slept with her, and you would have made us guilty of great sin.”

11 Then Abimelech issued a public proclamation: “Anyone who touches this man or his wife will be put to death!”

12 When Isaac planted his crops that year, he harvested a hundred times more grain than he planted, for the Lord blessed him. 13 He became a very rich man, and his wealth continued to grow. 14 He acquired so many flocks of sheep and goats, herds of cattle, and servants that the Philistines became jealous of him. 15 So the Philistines filled up all of Isaac’s wells with dirt. These were the wells that had been dug by the servants of his father, Abraham.

16 Finally, Abimelech ordered Isaac to leave the country. “Go somewhere else,” he said, “for you have become too powerful for us.”