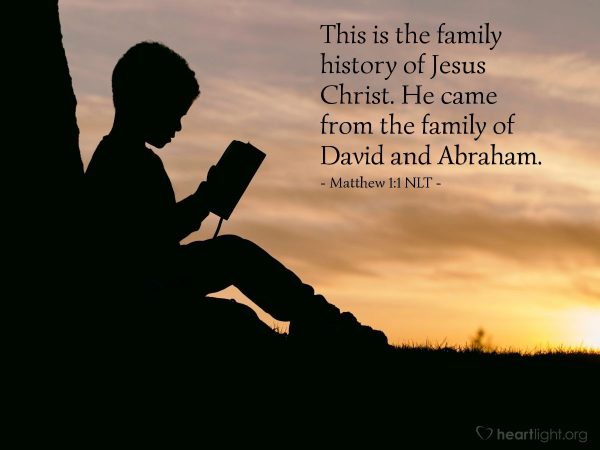 This morning I read the first book of the New Testament in my One-year-Bible which was Matthew 1. It told of the genealogy of Jesus. Basically, I learned that humans sin and God saves.

Here’s what stood out to me~

1) Matthew wrote out the genealogy of Jesus in three groups of fourteen. In the Bible, seven is a number referring to God and fourteen is two groups of seven. The second and third geneology groups were divided around the exile of God’s people to Babylon. When Israel was exiled to Babylon it was significant. They were in exile for 70 years. Their exile to Babylon was used as correction for their sins. God had to go to this extreme to cause His people to realize their wrongdoings and come back to Him.

In the Old Testament when you read about the Kings, right after their name is mentioned, it tells if they did good or evil in the sight of God. Josiah was a good king. God placed him in power before the exile. His son Jehoichin was in power when Israel was exiled. God used the leader Josiah to draw His people back to Him before they were forced to go to Babylon.

3) In Verses 5 And 6, it mentions two women. One was Rahab. She was a known prostitute but was blessed by God because she helped some Israelite men as they began to enter the Promised land. She was the mother of Boaz.

Boaz married a woman named Ruth. Ruth trusted God in very hard circumstances. Ruth had a son named Jesse, who would later have several sons, one of them was named David and he would be King of Israel. Both of these women were not Jews.God stressed in the Old Testament that the Jewish people were His prized possession. But He allowed non-Jews to be a part of Jesus’ family tree.

4) The third group of fourteen generations ends with Jesus. He is the Messiah to the Jews. Messiah refers Saviour or deliverer to the God’s people.

All through the Old Testament, time and time again, God cried out to His people for Him to be their God and they would be His people. I have no doubt in my mind that those words are the desire of God’s heart. So God made a way for that greatly desired connection to become a reality for all humanity.

Another name for Jesus is Emmanuel which means ‘God with us.’ Anybody including Jewish people can have God in their life because Jesus is God with us.

In Matthew 1, when referring to His entrance in humanity, Jesus was called the Messiah and Emmanuel.

1 This is a record of the ancestors of Jesus the Messiah, a descendant of David and of Abraham:

18 This is how Jesus the Messiah was born. His mother, Mary, was engaged to be married to Joseph. But before the marriage took place, while she was still a virgin, she became pregnant through the power of the Holy Spirit. 19 Joseph, to whom she was engaged, was a righteous man and did not want to disgrace her publicly, so he decided to break the engagement quietly.

20 As he considered this, an angel of the Lord appeared to him in a dream. “Joseph, son of David,” the angel said, “do not be afraid to take Mary as your wife. For the child within her was conceived by the Holy Spirit. 21 And she will have a son, and you are to name him Jesus, for he will save his people from their sins.”

22 All of this occurred to fulfill the Lord’s message through his prophet:

23 “Look! The virgin will conceive a child!
She will give birth to a son,
and they will call him Immanuel,
which means ‘God is with us.’”

24 When Joseph woke up, he did as the angel of the Lord commanded and took Mary as his wife. 25 But he did not have sexual relations with her until her son was born. And Joseph named him Jesus.