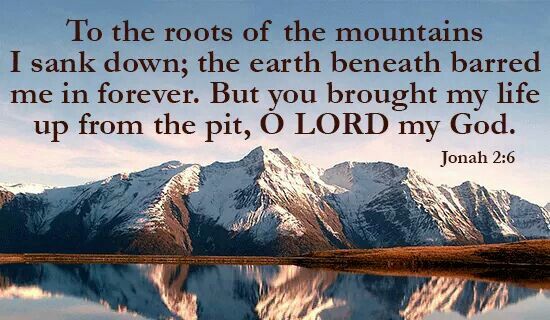 Ever been in a situation where you thought you were going to die? What did you do? Many times, people cry out to God then.

Jonah was was a reluctant prophet in the Old Testament. God told him to tell the people of Nineveh the bad news that judgment was coming against them. Jonah didn’t want to so he tried to run from God by leaving on a ship. He ended up in the sea and swallowed by a large fish. There, from his deep dark prison, He cried out to God and God answered him.

1Then Jonah prayed to the Lord His God from inside the fish. 2 He said,

“I cried out to the Lord in my great trouble,
and he answered me.
I called to you from the land of the dead,   and Lord, you heard me!
3 You threw me into the ocean depths,
and I sank down to the heart of the sea.
The mighty waters engulfed me;
I was buried beneath your wild and stormy waves.
4 Then I said, ‘O Lord, you have driven me from your presence.
Yet I will look once more toward your holy Temple.’

5 “I sank beneath the waves,
and the waters closed over me.
Seaweed wrapped itself around my head.
6 I sank down to the very roots of the mountains.
I was imprisoned in the earth,
whose gates lock shut forever.
But you, O Lord my God,
snatched me from the jaws of death!
7 As my life was slipping away,
I remembered the Lord.
And my earnest prayer went out to you
in your holy Temple.
8 Those who worship false gods
turn their backs on all God’s mercies.
9 But I will offer sacrifices to you with songs of praise,
and I will fulfill all my vows.
For my salvation comes from the Lord alone.”

10 Then the Lord ordered the fish to spit Jonah out onto the beach.

1Then the Lord spoke to Jonah a second time: 2 “Get up and go to the great city of Nineveh, and deliver the message I have given you.”

3 This time Jonah obeyed the Lord’s command and went to Nineveh, a city so large that it took three days to see it all.[c] 4 On the day Jonah entered the city, he shouted to the crowds: “Forty days from now Nineveh will be destroyed!” 5 The people of Nineveh believed God’s message, and from the greatest to the least, they declared a fast and put on burlap to show their sorrow.