I respect Daniel in the Old Testament. He had so many great qualities and truly honored God with his life. My mom named my youngest brother Daniel. And this year, as I have read through the book Daniel I keep getting jealous that my brother was given such an amazing name. I don’t even think he realizes the great Christian legacy within his name.

Daniel in the Bible was humble, very smart, highly disciplined in his personal and spiritual life, bold to speak truth, faithful in adversity, a trusted government leader for decades, an end of time prophet and a man of great faith in God. He prospered and was a leader that  honored God in Babylon while his people were in exile there. He triumphed and was respected by Babylonian Kings in years of difficult circumstances. My question is, “Did this man ever sin?”

What a great man! Yet he never had any children. They would have also been awesome. But this not sad because Daniel left an amazing legacy for Christians. Thousands of godly people throughout history have studied his life, admired him and copied his great qualities. When I was in my early twenties, I truly sought out God. And when I read that Daniel prayed to God intentionally three times I wanted that in my life. In recent years, a book was written about Daniel’s discipline of eating healthy. Thousands of people today have followed his diet.

My admiration of this man continues this morning as I read how the angel Gabriel interpreted a troubling, prophetic vision Daniel had. I hadn’t noticed Gabriel’s involvement when I read it in the past. But like Mary and Joseph, Daniel was visited by the angel Gabriel! Wow! This makes me just now realize that God most likely used this faithful man to comfort His people as they lived in a foreign land against their will.

So, in the following Bible verses is the interpretation by the angel Gabriel of the prophecy that God gave Daniel. It refers to the endtimes like also written about in the book of Revelation. 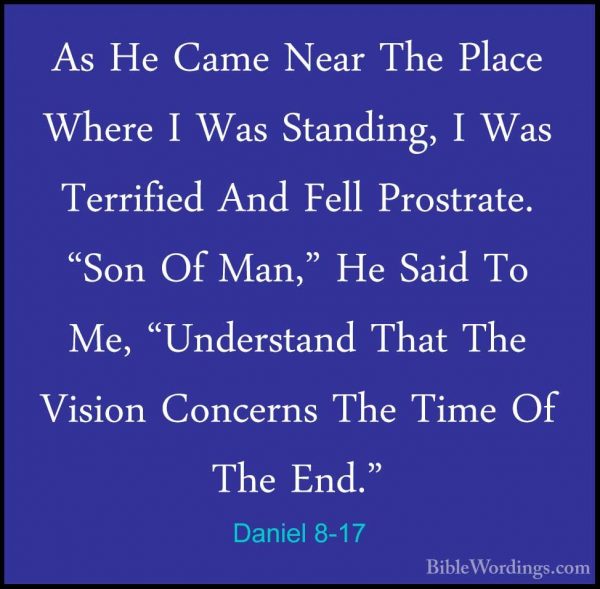 15 As I, Daniel, was trying to understand the meaning of this vision, someone who looked like a man stood in front of me. 16 And I heard a human voice calling out from the Ulai River, “Gabriel, tell this man the meaning of his vision.”

17 As Gabriel approached the place where I was standing, I became so terrified that I fell with my face to the ground. “Son of man,” he said, “you must understand that the events you have seen in your vision relate to the time of the end.”

18 While he was speaking, I fainted and lay there with my face to the ground. But Gabriel roused me with a touch and helped me to my feet.

23 “At the end of their rule, when their sin is at its height, a fierce king, a master of intrigue, will rise to power.24 He will become very strong, but not by his own power. He will cause a shocking amount of destruction and succeed in everything he does. He will destroy powerful leaders and devastate the holy people. 25 He will be a master of deception and will become arrogant; he will destroy many without warning. He will even take on the Prince of princes in battle, but he will be broken, though not by human power.

26 “This vision about the 2,300 evenings and mornings is true. But none of these things will happen for a long time, so keep this vision a secret.”

27 Then I, Daniel, was overcome and lay sick for several days. Afterward I got up and performed my duties for the king, but I was greatly troubled by the vision and could not understand it.