Paul was at the end of his life and had poured out his life for God. He had fought the good fight. Now he was was mentoring Timothy. He told the young man to tell the Gospel when he was prepared and when he wasn’t. He told him to be cautious of people who speak and say only what their audience want to hear. 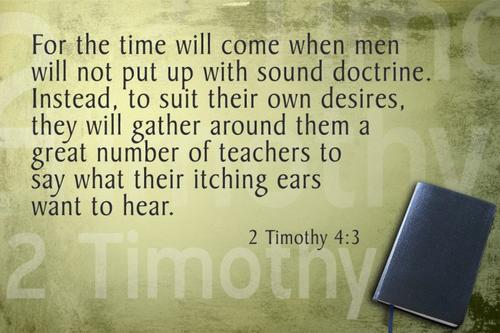 4 I solemnly urge you in the presence of God and Christ Jesus, who will someday judge the living and the dead when he comes to set up his Kingdom:2 Preach the word of God. Be prepared, whether the time is favorable or not. Patiently correct, rebuke, and encourage your people with good teaching.

3 For a time is coming when people will no longer listen to sound and wholesome teaching. They will follow their own desires and will look for teachers who will tell them whatever their itching ears want to hear. 4 They will reject the truth and chase after myths.

5 But you should keep a clear mind in every situation. Don’t be afraid of suffering for the Lord. Work at telling others the Good News, and fully carry out the ministry God has given you.

6 As for me, my life has already been poured out as an offering to God. The time of my death is near. 7 I have fought the good fight, I have finished the race, and I have remained faithful. 8 And now the prize awaits me—the crown of righteousness, which the Lord, the righteous Judge, will give me on the day of his return. And the prize is not just for me but for all who eagerly look forward to his appearing.