Jeremiah is known as the weeping prophet. God’s will for his life was to tell Israel and Judah that they were going to be severely punished for their much wrongdoing.  In one instance God told Jeremiah to go buy a loin cloth. And then do the following:

2. Take it off and hide it in rocks near a river

3. A long time later, dig it out of the rocks. It will be rotten.

God used this story to describe the state of His people.

God deeply loved His people. In this same passage, God told of His great desire for His people.

1. His people would cling to Him.

2. They would only be His people.

3. They would be His pride.

4. They would be His glory.

5. They would bring Honor to His name.

But instead of doing these things, they chose to worship false gods and do many other wrongs that saddened God’s heart. And then, as God’s heart was greatly saddened, He had to punish these beloved people.

But today, as Christians, we can fulfill the desire of God’s heart! We are the future generations of Israel and Judah. We can live our lives to please God in these ways. 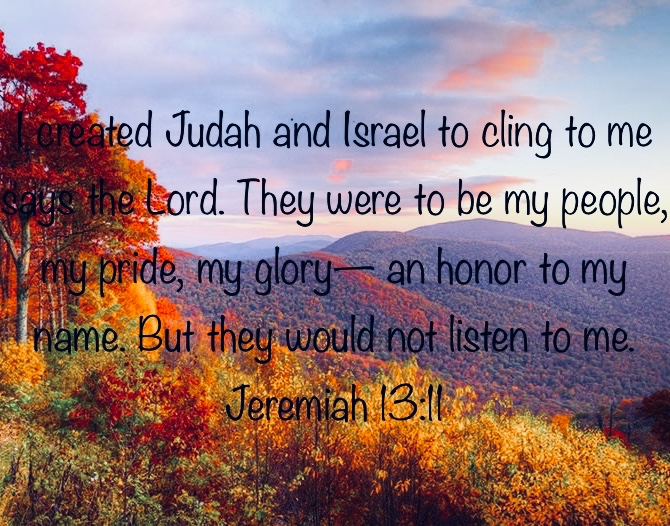 13 This is what the Lord said to me: “Go and buy a linen loincloth and put it on, but do not wash it.” 2 So I bought the loincloth as the Lord directed me, and I put it on.

3 Then the Lord gave me another message: 4 “Take the linen loincloth you are wearing, and go to the Euphrates River. Hide it there in a hole in the rocks.” 5 So I went and hid it by the Euphrates as the Lord had instructed me.

8 Then I received this message from the Lord: 9 “This is what the Lord says: This shows how I will rot away the pride of Judah and Jerusalem. 10 These wicked people refuse to listen to me. They stubbornly follow their own desires and worship other gods. Therefore, they will become like this loincloth—good for nothing! 11 As a loincloth clings to a man’s waist, so I created Judah and Israel to cling to me, says the Lord. They were to be my people, my pride, my glory—an honor to my name. But they would not listen to me.

13 “Then tell them, ‘No, this is what the Lord means: I will fill everyone in this land with drunkenness—from the king sitting on David’s throne to the priests and the prophets, right down to the common people of Jerusalem. 14 I will smash them against each other, even parents against children, says the Lord. I will not let my pity or mercy or compassion keep me from destroying them.’”