Paul  and Barnabas we’re visiting the town of Lystra. God used Paul to heal a lame man. After this happened the crowd considered the two the gods, Zeus and Hermes. But a short time later the situation changed. 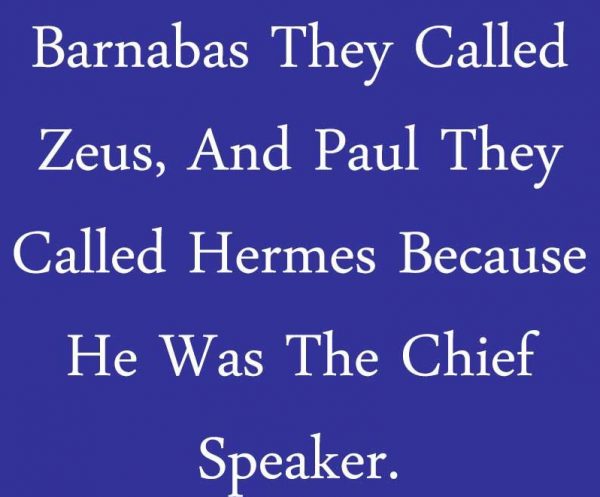 8 While they were at Lystra, Paul and Barnabas came upon a man with crippled feet. He had been that way from birth, so he had never walked. He was sitting 9 and listening as Paul preached. Looking straight at him, Paul realized he had faith to be healed. 10 So Paul called to him in a loud voice, “Stand up!” And the man jumped to his feet and started walking.

11 When the crowd saw what Paul had done, they shouted in their local dialect, “These men are gods in human form!” 12 They decided that Barnabas was the Greek god Zeus and that Paul was Hermes, since he was the chief speaker. 13 Now the temple of Zeus was located just outside the town. So the priest of the temple and the crowd brought bulls and wreaths of flowers to the town gates, and they prepared to offer sacrifices to the apostles.

14 But when the apostles Barnabas and Paul heard what was happening, they tore their clothing in dismay and ran out among the people, shouting,15 “Friends, why are you doing this? We are merely human beings—just like you! We have come to bring you the Good News that you should turn from these worthless things and turn to the living God, who made heaven and earth, the sea, and everything in them.16 In the past he permitted all the nations to go their own ways, 17 but he never left them without evidence of himself and his goodness. For instance, he sends you rain and good crops and gives you food and joyful hearts.”18 But even with these words, Paul and Barnabas could scarcely restrain the people from sacrificing to them.

19 Then some Jews arrived from Antioch and Iconium and won the crowds to their side. They stoned Paul and dragged him out of town, thinking he was dead. 20 But as the believers gathered around him, he got up and went back into the town. The next day he left with Barnabas for Derbe.