Paul (also known as Saul) and Barnabas met a sorcerer named Bar-Jesus. Paul spoke up to him and told him hard times would come on his life and he would be blinded. Sounds like he would be changed like Paul himself was changed when he encountered Jesus on the road to Damascus. 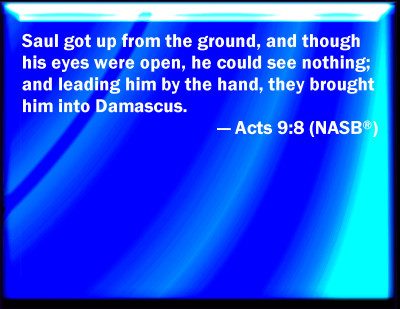 9 Meanwhile, Saul was uttering threats with every breath and was eager to kill the Lord’s followers.So he went to the high priest. 2 He requested letters addressed to the synagogues in Damascus, asking for their cooperation in the arrest of any followers of the Way he found there. He wanted to bring them—both men and women—back to Jerusalem in chains.

3 As he was approaching Damascus on this mission, a light from heaven suddenly shone down around him.4 He fell to the ground and heard a voice saying to him, “Saul! Saul! Why are you persecuting me?”

And the voice replied, “I am Jesus, the one you are persecuting! 6 Now get up and go into the city, and you will be told what you must do.”

7 The men with Saul stood speechless, for they heard the sound of someone’s voice but saw no one! 8 Saul picked himself up off the ground, but when he opened his eyes he was blind. So his companions led him by the hand to Damascus. 9 He remained there blind for three days and did not eat or drink. 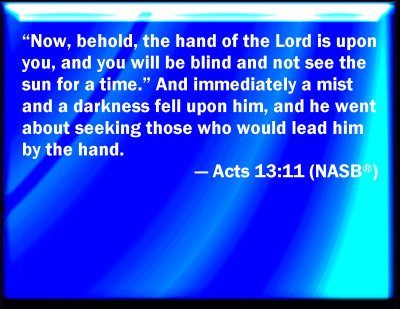 6 Afterward they traveled from town to town across the entire island until finally they reached Paphos, where they met a Jewish sorcerer, a false prophet named Bar-Jesus. 7 He had attached himself to the governor, Sergius Paulus, who was an intelligent man. The governor invited Barnabas and Saul to visit him, for he wanted to hear the word of God.8 But Elymas, the sorcerer (as his name means in Greek), interfered and urged the governor to pay no attention to what Barnabas and Saul said. He was trying to keep the governor from believing.

9 Saul, also known as Paul, was filled with the Holy Spirit, and he looked the sorcerer in the eye.10 Then he said, “You son of the devil, full of every sort of deceit and fraud, and enemy of all that is good! Will you never stop perverting the true ways of the Lord? 11 Watch now, for the Lord has laid his hand of punishment upon you, and you will be struck blind. You will not see the sunlight for some time.” Instantly mist and darkness came over the man’s eyes, and he began groping around begging for someone to take his hand and lead him.