King Ahab and his wife Jezebel did the most evil in their reign, more than any other (1 Kings 16:30). But God was gracious and Godfearing people were also present in this time such as King Asa of Judah, Elijah and Obadiah.

Obadiah was in charge of King Ahab’s palace. At one time Queen Jezebel sought to kill 100 prophets of God. Obadiah hid them. Obadiah reminds me of the Godfearing people who hid Jews in their homes during the German Holocaust. (Oh and by the way, it is disputed among Bible scholars if this is the same Obadiah who is in the Old Testament minor prophet book.) 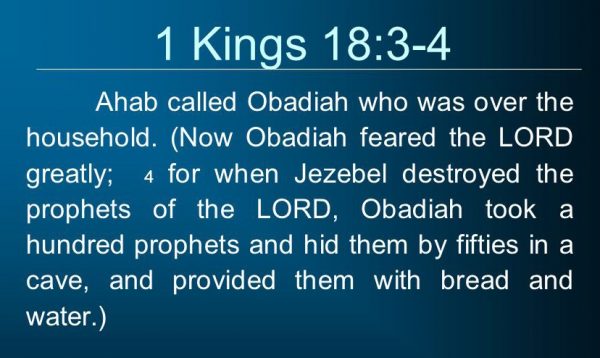 18 Later on, in the third year of the drought, the Lord said to Elijah, “Go and present yourself to King Ahab. Tell him that I will soon send rain!”2 So Elijah went to appear before Ahab.

Meanwhile, the famine had become very severe in Samaria. 3 So Ahab summoned Obadiah, who was in charge of the palace. (Obadiah was a devoted follower of the Lord.4 Once when Jezebel had tried to kill all the Lord’s prophets, Obadiah had hidden 100 of them in two caves. He put fifty prophets in each cave and supplied them with food and water.) 5 Ahab said to Obadiah, “We must check every spring and valley in the land to see if we can find enough grass to save at least some of my horses and mules.”6 So they divided the land between them. Ahab went one way by himself, and Obadiah went another way by himself.

7 As Obadiah was walking along, he suddenly saw Elijah coming toward him. Obadiah recognized him at once and bowed low to the ground before him. “Is it really you, my lord Elijah?” he asked.

9 “Oh, sir,” Obadiah protested, “what harm have I done to you that you are sending me to my death at the hands of Ahab? 10 For I swear by the Lord your God that the king has searched every nation and kingdom on earth from end to end to find you. And each time he was told, ‘Elijah isn’t here,’ King Ahab forced the king of that nation to swear to the truth of his claim.11 And now you say, ‘Go and tell your master, “Elijah is here.”’ 12 But as soon as I leave you, the Spirit of the Lord will carry you away to who knows where. When Ahab comes and cannot find you, he will kill me. Yet I have been a true servant of the Lord all my life. 13 Has no one told you, my lord, about the time when Jezebel was trying to kill the Lord’s prophets? I hid 100 of them in two caves and supplied them with food and water. 14 And now you say, ‘Go and tell your master, “Elijah is here.”’ Sir, if I do that, Ahab will certainly kill me.”

15 But Elijah said, “I swear by the Lord Almighty, in whose presence I stand, that I will present myself to Ahab this very day.”

16 So Obadiah went to tell Ahab that Elijah had come, and Ahab went out to meet Elijah. 17 When Ahab saw him, he exclaimed, “So, is it really you, you troublemaker of Israel?”