If you follow Jesus take your talents and abilities and make the biggest investment in God that you possibly can. Take risks and step outside of your comfort zone to help others know God. 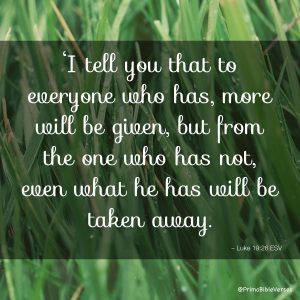 11 The crowd was listening to everything Jesus said. And because he was nearing Jerusalem, he told them a story to correct the impression that the Kingdom of God would begin right away. 12 He said, “A nobleman was called away to a distant empire to be crowned king and then return. 13 Before he left, he called together ten of his servants and divided among them ten pounds of silver, saying, ‘Invest this for me while I am gone.’ 14 But his people hated him and sent a delegation after him to say, ‘We do not want him to be our king.’

15 “After he was crowned king, he returned and called in the servants to whom he had given the money. He wanted to find out what their profits were. 16 The first servant reported, ‘Master, I invested your money and made ten times the original amount!’

17 “‘Well done!’ the king exclaimed. ‘You are a good servant. You have been faithful with the little I entrusted to you, so you will be governor of ten cities as your reward.’

18 “The next servant reported, ‘Master, I invested your money and made five times the original amount.’

20 “But the third servant brought back only the original amount of money and said, ‘Master, I hid your money and kept it safe. 21 I was afraid because you are a hard man to deal with, taking what isn’t yours and harvesting crops you didn’t plant.’

22 “‘You wicked servant!’ the king roared. ‘Your own words condemn you. If you knew that I’m a hard man who takes what isn’t mine and harvests crops I didn’t plant, 23 why didn’t you deposit my money in the bank? At least I could have gotten some interest on it.’

24 “Then, turning to the others standing nearby, the king ordered, ‘Take the money from this servant, and give it to the one who has ten pounds.’

26 “‘Yes,’ the king replied, ‘and to those who use well what they are given, even more will be given. But from those who do nothing, even what little they have will be taken away. 27 And as for these enemies of mine who didn’t want me to be their king—bring them in and execute them right here in front of me.’”