John’s disciple asked Jesus if He was the Messiah. This was after Jesus had become well-known for healing people. He told them God blesses people who do not reject Him. 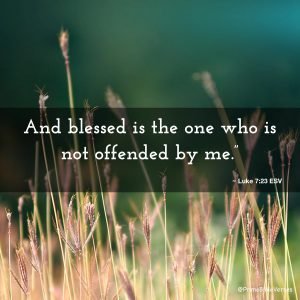 18 The disciples of John the Baptist told John about everything Jesus was doing. So John called for two of his disciples, 19 and he sent them to the Lord to ask him, “Are you the Messiah we’ve been expecting, or should we keep looking for someone else?”

20 John’s two disciples found Jesus and said to him, “John the Baptist sent us to ask, ‘Are you the Messiah we’ve been expecting, or should we keep looking for someone else?’”

21 At that very time, Jesus cured many people of their diseases, illnesses, and evil spirits, and he restored sight to many who were blind. 22 Then he told John’s disciples, “Go back to John and tell him what you have seen and heard—the blind see, the lame walk, those with leprosy are cured, the deaf hear, the dead are raised to life, and the Good News is being preached to the poor.” 23 And he added, “God blesses those who do not fall away because of me.