God wanted His people to trust Him as they entered the Promised Land where they would have to fight to obtain it. 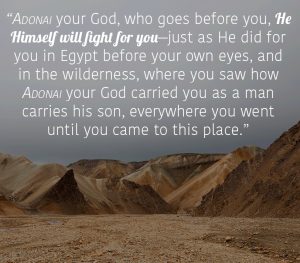 26 “But you rebelled against the command of the Lord your God and refused to go in. 27 You complained in your tents and said, ‘The Lord must hate us. That’s why he has brought us here from Egypt—to hand us over to the Amorites to be slaughtered. 28 Where can we go? Our brothers have demoralized us with their report. They tell us, “The people of the land are taller and more powerful than we are, and their towns are large, with walls rising high into the sky! We even saw giants there—the descendants of Anak!”’

29 “But I said to you, ‘Don’t be shocked or afraid of them! 30 The Lord your God is going ahead of you. He will fight for you, just as you saw him do in Egypt. 31 And you saw how the Lord your God cared for you all along the way as you traveled through the wilderness, just as a father cares for his child. Now he has brought you to this place.’

32 “But even after all he did, you refused to trust the Lord your God, 33 who goes before you looking for the best places to camp, guiding you with a pillar of fire by night and a pillar of cloud by day.

34 “When the Lord heard your complaining, he became very angry. So he solemnly swore, 35 ‘Not one of you from this wicked generation will live to see the good land I swore to give your ancestors, 36 except Caleb son of Jephunneh. He will see this land because he has followed the Lord completely. I will give to him and his descendants some of the very land he explored during his scouting mission.’

37 “And the Lord was also angry with me because of you. He said to me, ‘Moses, not even you will enter the Promised Land! 38 Instead, your assistant, Joshua son of Nun, will lead the people into the land. Encourage him, for he will lead Israel as they take possession of it. 39 I will give the land to your little ones—your innocent children. You were afraid they would be captured, but they will be the ones who occupy it. 40 As for you, turn around now and go on back through the wilderness toward the Red Sea.’